Firstly, as ever, we want to say a huge ‘thank you’ to all of you who came out to see us at one of the 49 shows we have played since February.To all of you who saw us in America, in Germany, in Holland, in Switzerland, in France, and all around the UK,  we hope you enjoyed getting back out, hearing and seeing live music again just as much as we did playing it.

To be back out touring, travelling, crossing borders, being on stage in front of an audience, not via a damn screen, has been a joy. After the past 2 years we have all had, it is something we will never take for granted again.

We do appreciate these are still uncertain times and know that some people are reticent to return to public places, such as theatres and clubs, but ALL musicians need the support of their audience in order to keep going, to survive, so once again THANK YOU for coming out.

Ireland, sorry we have not been over yet, and we thank you for your emails asking “when?”  We are working on something for later in the year. And also a return to Scandinavia. Stay tuned. Dates are being added all the time.

For now, all confirmed shows can be found here. 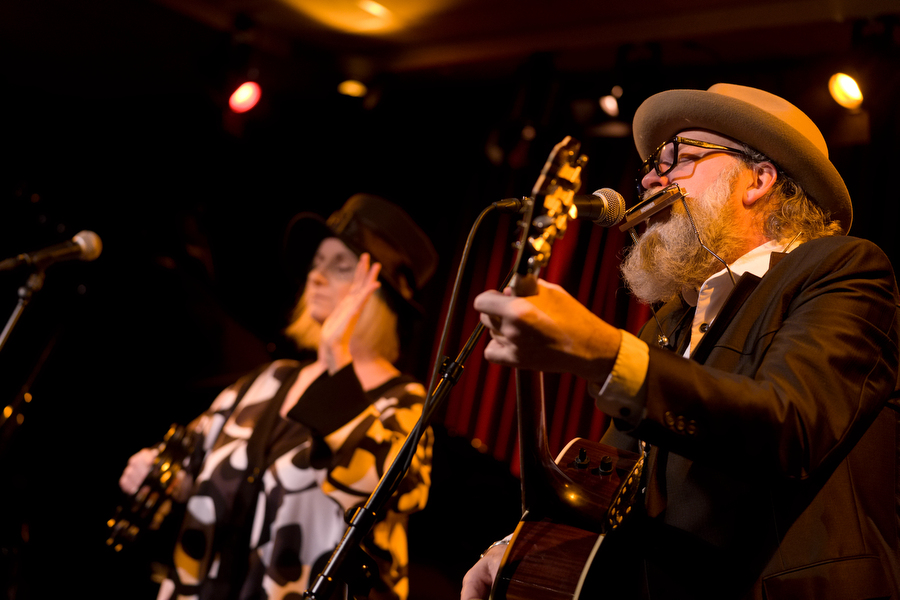 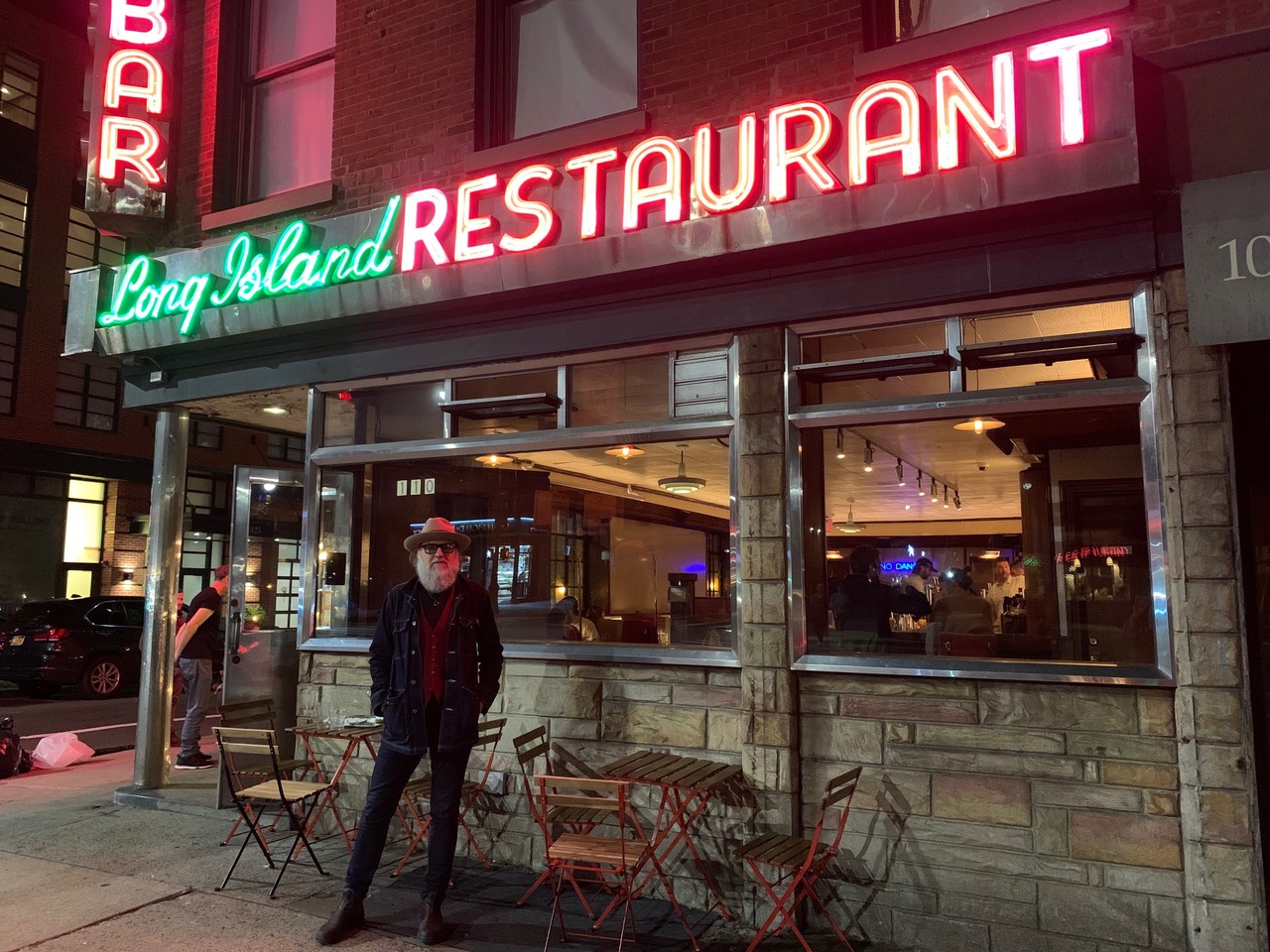 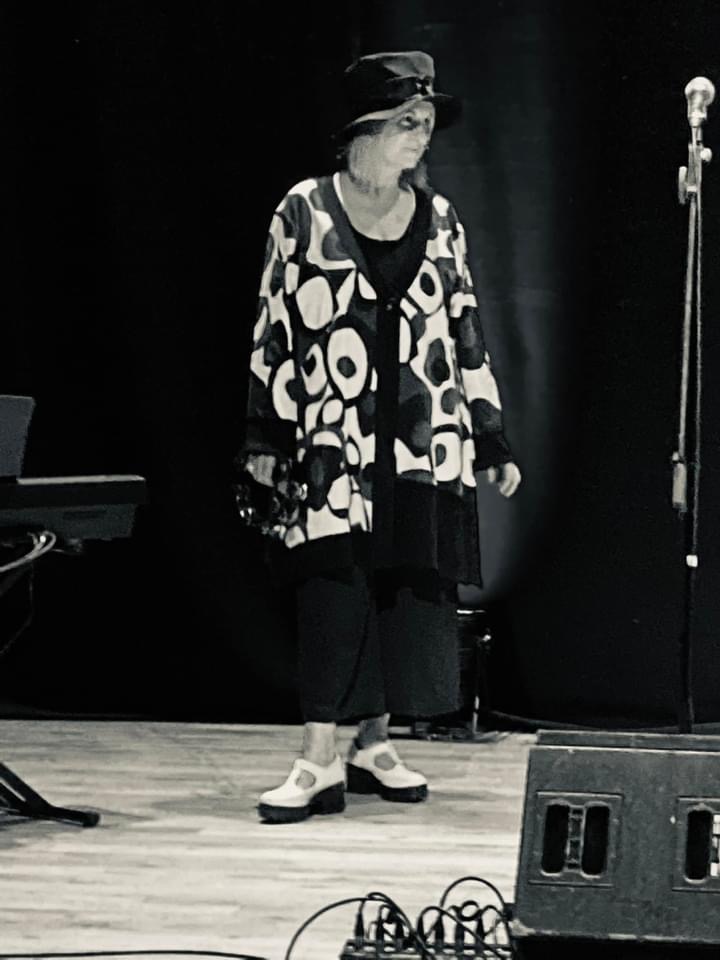 So what’s next? Whats coming up immediately?

Well, April saw the release of Michael’s solo album, The Struggle.It is his first in over 10 years, the first since MDC was formed,  and the reaction has been incredible, with it receiving unanimously brilliant reviews from all quarters of the media. Hit the link for just some of things that have been said.

The album also featured in the top 20 of both the Official Folk Charts and Official Americana charts for May. 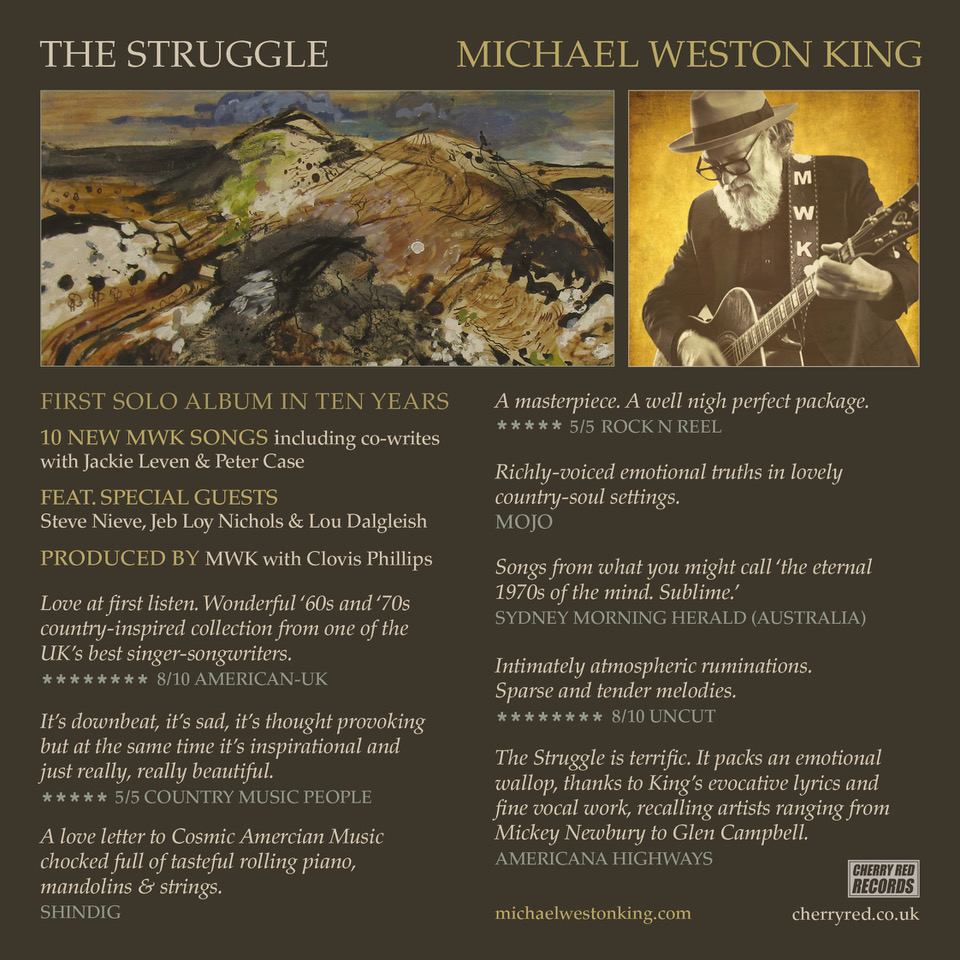 If you have not yet heard the album then you can stream, download, or buy the cd here.

All CD copies bought via the MWK web site will be signed and personalised as requested; and, for a short time only, will come with free, limited-edition poster.

As ever the cd is beautifully packaged. Comes in a matt digipak format, with 12 page lyric book. Front cover is original art by renowned Welsh painter Dan Llywelyn Hall.

We are also excited to announce a new video for the song, The Final Reel, which can be seen here.

The Final Reel is a short musical tribute to the much missed singer, songwriter, story-teller and dear friend, Jackie Leven.

Michael has just come back from Greece,  where he was part of a special tribute concert which took place on the island of Paxos, to celebrate Jackie’s life and work.

If you were not able to make that show, then MWK’s next solo outing is a little closer to home. He will be in Birmingham THIS WEDNESDAY,

This show will see him once again joined by the quite brilliant Clovis Phillips, to play all of the new album plus songs from the back catalogue and a few by his favourite writers too. 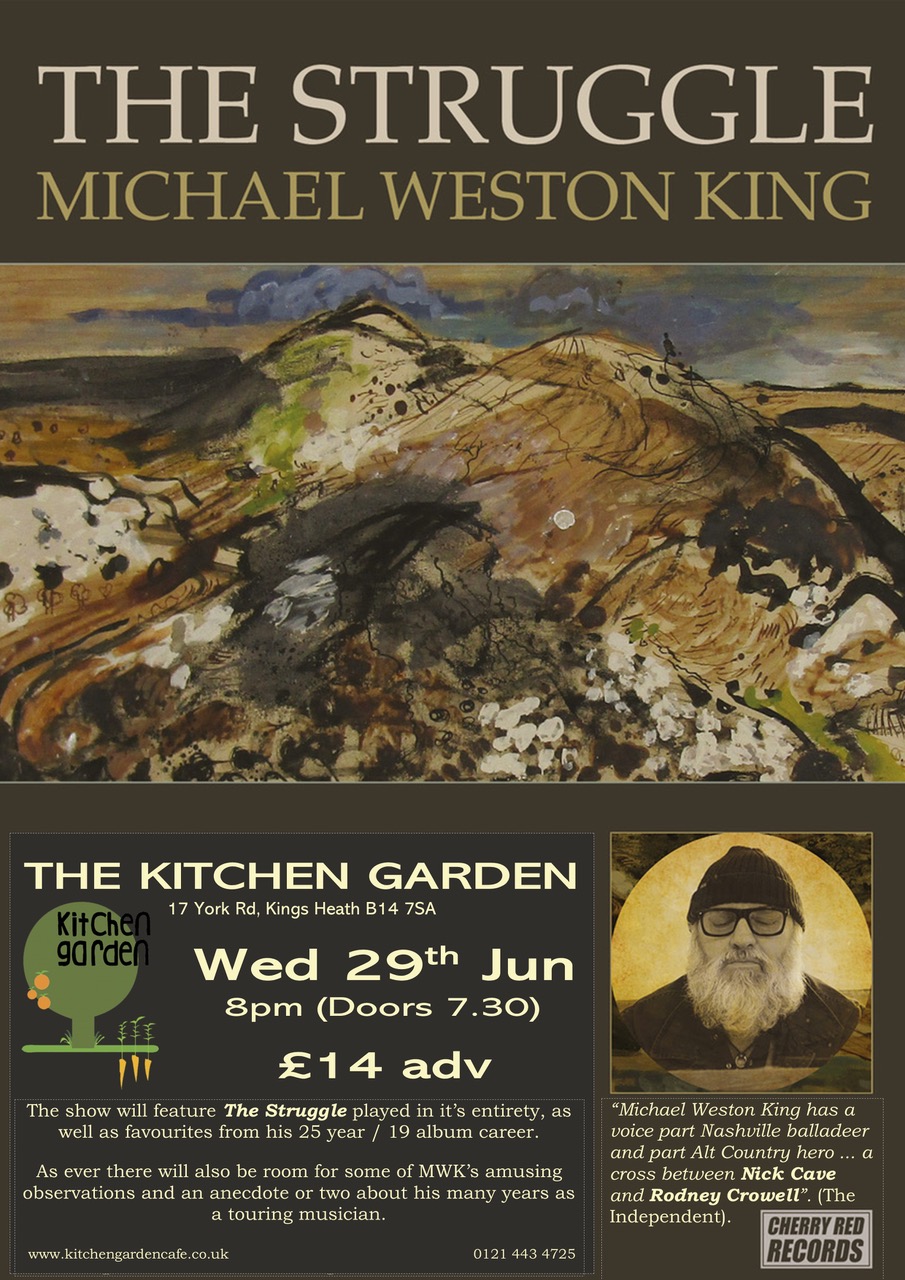 As we move into July,  we are excited to announce that we are finally getting together with Steve Nieve to play some live shows. The pandemic and our own touring schedules have kept us apart but now, for 2 nights in July at least, we can finally get together and bring you the songs we recorded on the Country Darkness album, onto the stage and play them live.

The shows are as follows;

My Darling Clementine with Steve Nieve

We also have a few copies of this beautiful poster available. Designed by Mark Gerking we are giving it away free with any orders of The Struggle  or Country Darkness CD OR Country Darkness vinyl. 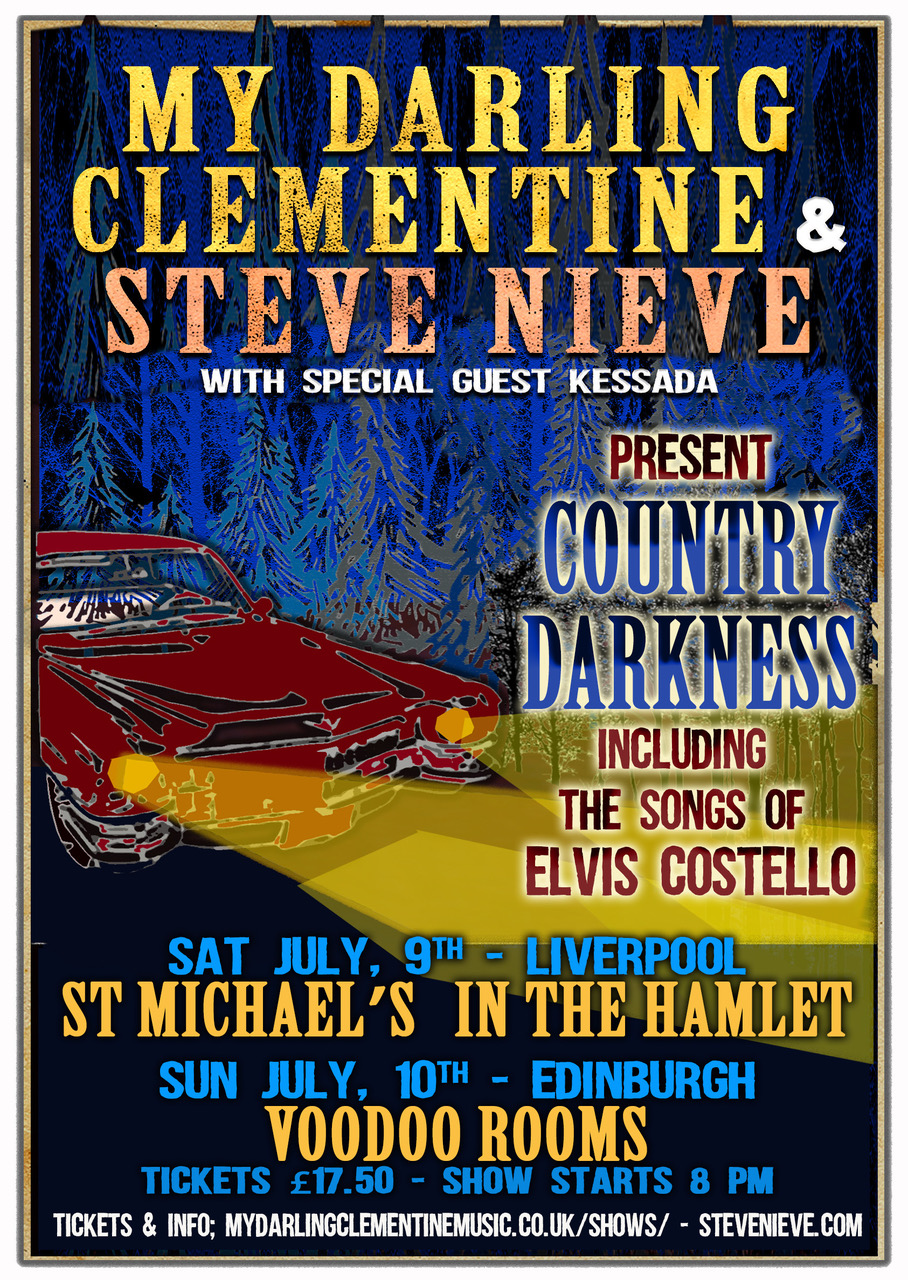 These will be very special shows, and we are not sure if there will be any more, so if you can make it, PLEASE DO.

After playing so many shows in Spring, we are dividing our time between the beach and the studio for the rest of summer, as we start to think about, and start to record the new MDC album.

Any suggestions for titles are welcome and will be considered. Write to us here.

Quite where we are going with the new album musically is still to be decided but we can guarantee you brand new songs.

Meanwhile, keep in touch and up to date with what we are doing,  both together and alone, via our various social media pages;

Yours in music,
Lou and Michael

After a very busy and life affirming 3 months of touring, both solo and with MDC, a few weeks off the road now but here is news of upcoming shows in June and July
Tickets on sale now: 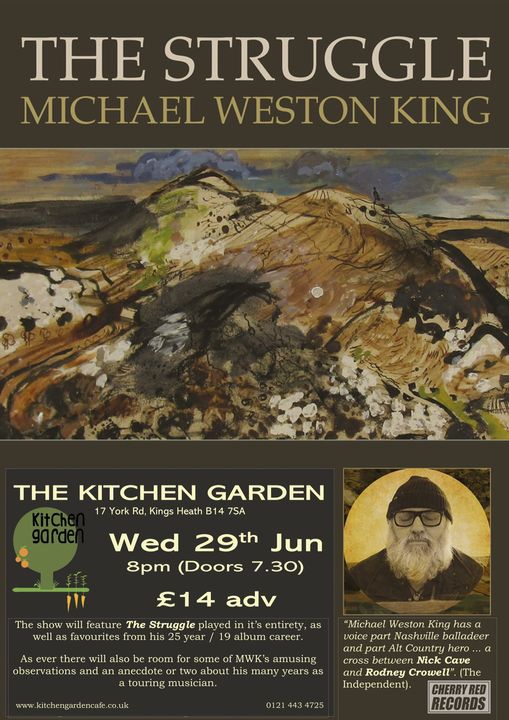 Then two very special My Darling Clementine shows coming up with the great Steve Nieve, in Liverpool and Edinburgh.
These have been a long time coming and we are all really looking forward to bringing the Country Darkness collaboration to the stage at last. 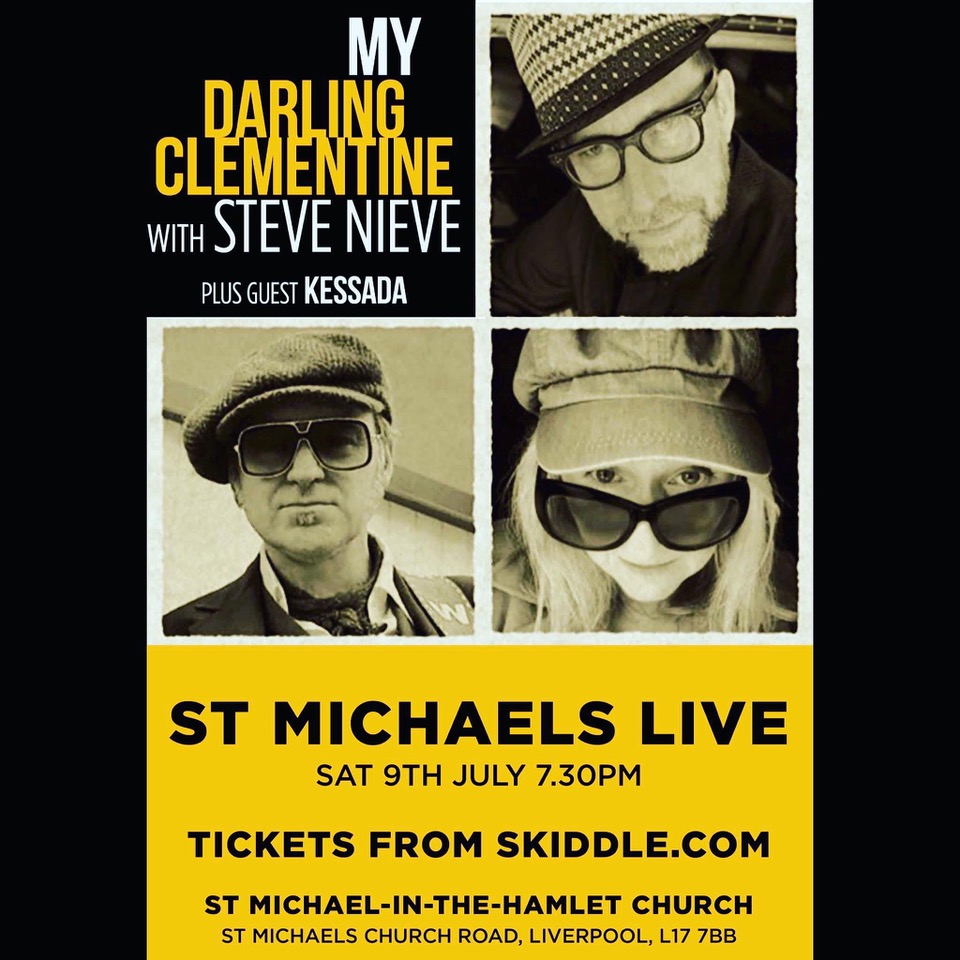 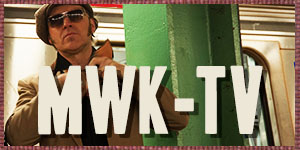